Friends, today we uploaded a new update, unfortunately, we were not able to complete everything that was prepared for you, but we will try to release the next patch in a week and download everything that is left. MCS: Weapons and Catapult can no longer be attacked from respawn.
MCS and DCS: Now when you have high movement speed your character will not rise into the air.

* If a round lasts more than 5 minutes and does not have a winner, then all who survived die and do not advance to the next round.

* Unregistered characters will no longer be able to teleport to the arena.

- Elemental: Jail of Water animation slowed down by 30%.
- Fairy All Buff - ABS works.

- Persistent Impression: Drop only from an equal monster level. (item has a new model)

- P2: does not raise the drop of other characters.

- Title:
* Added the ability to remove title from the NPC Crean's stash once a month for 10kkk. - Glory Points: We believe that this system is outdated and in order to add new content we are forced to delete the old one. If we do not do this for new players, all desire to play will disappear because it will be very difficult for them. Therefore, this system has been removed.

- The Custom Title Box now requires 400 cash to open.
- Now you can open many boxes at once. - You can no longer summon monsters on channel 2.
- Added new location: Riddle Vales. A lot of work has been done, many things I did not write here because they are of a technical nature, I hope you enjoy this update.

Part II (In the next patch)

We will add a new siege, we have practically made it 60%, and we plan to complete it before October 22, we will try.
The siege zone will look like this: Respawn zone for everyone: Friends, I have always cared about your comfort and I am always worried about making you comfortable to play, I see that we have come to a stage of the game where the result is quick keystrokes and many people started using macro. I have always treated this in an impartial way, but a lot of people do not want to play in these conditions and I understand them, it is really not convenient, in order to start winning you need to use various programs, this is not right and is not a success for anyone.
I only asked you one thing, don't use jokes in the chat like 123123123123 .... or something like that. Because at this stage now we do not have the opportunity to turn off the macro and delete it, so we are trying to have at least some evidence using the chat. Indeed, when you play under macro, you can accidentally write to the chat and you yourself have seen this more than once, but many people began to write this on purpose, I will block such people. I see that many began to do this with twink accounts, and so - soon I'll go to your main accounts if it's fun for you to have fun together. * you can send to me and the character will be blocked immediately.
If you see such messages then they will not be considered as macro:


I would also like to thank all the jokers who have successfully slowed down the update process. I hope that by October 5th we will finish the update, and then we will start exploring various protections against macro programs.

Thanks for your attention! Enjoy the game!

Hi, we've made a small patch. We plan to do a big update after the vacation, we will start it on September 10th and I think we will finish it at the end of the month. We have some ideas already, but for that we need a little rest.

- Lucky Spell Book no longer works in bot mode.
- The elementalist can no longer pull the rogue from invisibility when the spirits attack.
- Fixed various technical bugs.
- Nightshadow when using P1 can teleport to the center of the location.
- Altar Dukan affinity removed Card Enter to Capella from the bounty.
- Dungeon: Added a buff from icons.

Hi, we've made a new update for you, it's small but has a lot of technical work.

I really hope for your activity, we always listen to everything you say to us, if you like or do not like our changes, let us know, we are always ready for dialogue. * Defense:
1. The castle guard monsters have been strengthened and there are more of them.
2. You can buy additional tower that will help you kill enemies.
* Attack:
1. To open the gate, you just need to kill the monsters.
2. Now you can respawn closer to the castle.
3. For killing enemies and monsters, you get extra points.
- Castle Ownership Reward:
* We have completely changed the reward, now the owners of the DСS receive taxes for the Dratan location and all its controlled locations. (taxes include for the buy / sale of items, also drop gold at these locations)
* We have completely changed the reward, now MCS owners receive taxes on the Merac location and all of its controlled locations. (taxes include buying / selling items, and dropping gold in these locations)
- Moonstone Golem: delet Card Enter to Capella (1 h.)
- Dungeon Party: Reduced the number of players from 7 to 5. - Jewel Fusion Scroll and Chaos Jewel Fusion Scroll -count increased from 999 to 9999.
- Cleric: Heal Master reduced from 22% to 17% for allies (22% left for the cleric personally)
- +5 stats per click.
- Now you can create several NS on one account.

- Achievement bugs fixed.
- Alternative Source of Supply quest changed at your request.
- We added a 'P2 event' to the Cash Store so new players can compete with old ones. Currently only 25 are available. (10% discount coupon - RAREPET10)
- Oscar's Precious Box - Useless rewards have been removed.
- Fixed various technical bugs.

Friends, we made an update, we see that the activity on our server has decreased, this is due to numerous factors, the main one of which is summer time, we will do our best so that you do not forget about us even in such a warm season.

Change:
- We have created a promo code system in a cash store. Now all followers of our Instagram will be able to receive secret promotional codes every week. - Survival Dungeon: now you can restart the stage if you have any problems - bugs.
- Fixed technical bugs.
- Affinity: Imperial Legion Teleport is working.
- Quest: Fall of the High Heavens and The Light of Hope reward increased by x2.

- A gift set has been added for active and inactive, for activation you need to make a donation of 100,000 cash or more.

If you haven't played for over two weeks, you will have 3 days to take advantage of this offer. (reward cannot be traded) 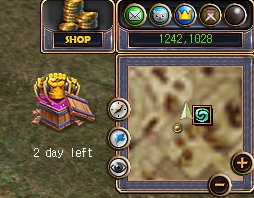 If you are an active player you will have a different reward but you can also use it for 3 days. (reward cannot be traded) - Cappella is no longer relevant and we decided to disable it, the Skill Upgrade Scroll can be obtained for completing the Dungeon Party. - P2 no longer collects someone else's drop.
- Added information about your stats: - Holy Water of Strength: We were forced to disable this item because the bonus it gives was not intended for this. It was a bug. This item should have been deleted 3 years ago.
Enjoy the Game!